I recently got the opportunity to spend some time with John Harrell from 2XTap Shooting Academy, and try out their new Firearms Training Simulator (FiTS) which will be opening to the public this week.  I am extremely impressed, and you should be excited that such a phenomenal training opportunity is coming to our community.  They will officially open Saturday, October 19, 2013, 9AM-5PM.

John is an experienced NRA-certified instructor, and also offers a variety of other defense-focused courses, using pistols, shotguns, and rifles.  He explained to me that throughout his instruction career, he's noticed a big gap in the ability to provide high-quality, scenario-based training to his students.  The military has been using video training simulators for decades, and most police departments have their very own now as well.  However, as far as John could find, his is the only professional-quality simulator available to the public, this side of the Mississippi River.  That's a very big gap to fill, indeed.

I've had the opportunity in the military to use training simulators on numerous occasions, and have even used a number of law enforcement's while training with them, including the one inside the Windsor, CO Police Department.  John's is the best I've seen yet, partly because it's using the newest available technology.  With a 15'Wx9'H screen, in full 1080p resolution and 5.1 surround sound, it's practically a movie theater experience at close range.  When the system is fired up, and you get a chance to try out some of its over 500+ scenes and scenarios, that's when the fun begins.

The system is the top of the line model from TI Training, based here in Golden, CO.  It can serve up a wide range of shooting and decision making opportunities, from static computer-generated (CGI) "plate racks" of zombie heads, CGI first-person-shooter-esque "walk throughs" with multiple moving "shoot" and "no-shoot" targets appearing, to video-based home or business invasions, or on to movie-quality military traffic control points ("check points").  Twice a year, TI releases packages of additional training scenarios, and FiTS can even be hired to make you a custom training environment filmed on-location in the building of your choosing.  The system can recognize up to four actively participating shooters concurrently, and the technician can vary the outcome of the events to react to how the participants behave.  For example, if you scream "Put the gun down" at a would-be bank robber on the screen, the technician has the ability to make the gunman submit or attack, in real time.  To add to the realism, the laser pistols that you shoot at the screen were actual live firearms that have had their barrels temporarily replaced with lasers, and the magazines replaced with CO2 cartridges to power the realistic recoil when you pull the trigger.  The sound of the gun firing comes through the speakers, which was unfortunately the only cue that my gun was "empty", since it continued deftly recoiling as I proceeded to engage targets without "reloading".

Simulators are a proven method to not only improve shooting skills, but also critical decision making skills for concealed-carriers and home-defenders.  You can test out your gear setup, and practice advanced skills such as drawing from concealment, firing rapidly at a threat dropping to the ground or moving, and the use of cover and concealment.  These activities, while critical training, are often forbidden on live ranges for efficiency or safety reasons.  You also get the opportunity, in the simulator, to consider complex, evolving dilemmas, such as whether it is acceptable to shoot a bank robber as soon as you see him draw a firearm, or whether to allow a criminal to shoot an innocent victim when you do not have a clear path to attack without the possibility of wounding innocent people yourself.  And when you're done, there is no brass to pick up, and no guns to clean. 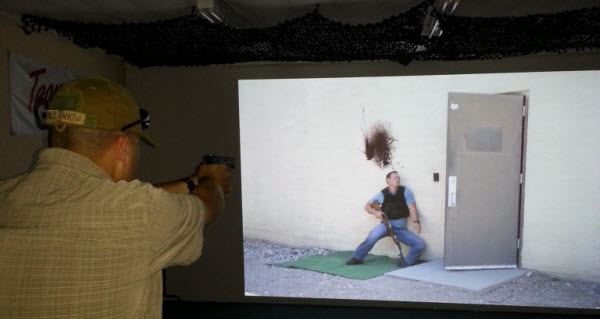 The system responds fantastically in the video-footage scenarios.  The many individual video clips that are strung together to display an event, dictated by the technician, are expertly crafted.  In the example scenario pictured above, with gunman wearing body armor and wielding an AK-47, I got to play through several times, to see how the different outcomes unfold.  An immediate neutralizing shot to the head results in blood splatter on the wall as the adversary slumps to the ground.  In another variation, a shot to the body armor causes him to stumble momentarily, before he gets back in the fight and engages you.  A shot to the pelvic girdle dropped the assailant to the ground, but he continued to fight, until another head shot splatted brain matter low on the wall, ending the confrontation.  You honestly can't see the transition between the video clips, unless you're looking for them.  The immersion is fantastic.

I also got to try out the low-light simulation mode.  Using a specially modified tactical flashlight, that you can't actually see with the human eye, the computer projects the same training environment I saw in daytime mode, but only makes visible those areas illuminated by my imaginary flashlight.  It's a clever and convincing effect, and effectively doubles the number of training scenarios, since you can run through them all in day or night mode.

Currently, John has a Glock 17 and a S&W M&P 9mm pistol to use.  Guns that FiTS will be getting in the future include a Glock 19, Sig 226, 1911, Remington 870 shotgun, M4 (AR-15) carbine, .357 revolver, and a lever action rifle.  Those of you that know about my advocacy of a carbine for defensive purposes can probably guess that I'm excited to get to tackle the simulator with a trusty M4.

Rates for the simulator are reasonable, considering how much you'd spend on ammo in a similar amount of live-fire range time.  Initial pricing is $30 per half hour for a technician-driven "virtual range" session, and $50 per half hour for a more comprehensive instructor-lead event, where you would build up on increasingly challenging scenarios and get expert feedback on your shooting and decision making.

FiTS is located in an upstairs training room in Rocky Mountain Shooter's Supply, at 3507 E. Mulberry St., Unit A, Fort Collins, CO 80524.  While the system can only accommodate 4 participants actively shooting at a single time, FiTS can handle larger groups, such as bachelor parties, families training together, and even deals with 3rd party instructors and their classes of students.

I highly recommend the FiTS experience for anyone who owns or carries a firearm for self-defense, as well as law enforcement and military personnel who want to hone their skills with some extra practice.  John said "If you experience a fight, even a virtual fight, you can use that experience to increase your chances of winning the next one."  Remember our motto, "You don't rise to the occasion.  You fall to your level of training."  And the FiTS is excellent training.  If you still aren't convinced by now, I'll leave you with one final note... YES, there are live-action ZOMBIE scenarios!